Drizzly and cold here lately but the plants know spring’s coming. I brought branches of three shrubs inside, to watch their little packages of potential unfold. Today’s day 1.

As usual, willows are among the first to start to open. But the serviceberry is also surprisingly bold. Both have early leaves and flowers that are protected by furry coats, so the risk is probably a little less for them than for, say, a spruce. Cottonwood’s buds are packed with aromatic sap, which gives the enclosed leaves some protection, but I haven’t seen any sign that they’re taking the chance yet. 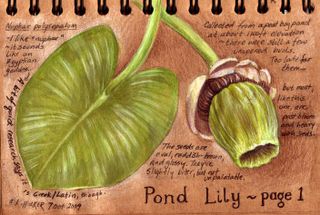 Spent a fair bit of time today wandering around a medium-elevation bog. Plants were about the same stage as those at sea level, though a couple of pond lilies still had underwater buds (!) This was particularly interesting, because I could see almost all of the stages of flowering at once. I had never studied their blooming cycle that closely. I was fascinated at how the pods dissolve in the still, tea-colored water of the bog ponds; I could see scatterings of seeds underneath several plants.

I always feel a little guilty picking a pond lily flower or seedpod. They're so big, and so gracefully-formed: like urns or chalices. But there were so many this summer that I'm not feeling too terrible about it. Several of my plant books say the seeds are edible and tasty. I'd say edible, perhaps borderline tasty. They're big, anyway: as big as grains of Calrose rice.

Everything's going to seed these days… all those unpicked blueberries are bloated with rain and tasteless now, bursting and spattering their little seeds onto the vegetation below, menziesia pods drying and curling, and these two bog/wet forest plants whose seed capsules I find particularly enchanting-looking…

Traveling in Oregon now, visiting family, and it's fun to see the variety of tree shapes… Much bigger than in Alaska! These are my best guesses on species…

Here in Southeast Alaska, lodgepole pine (Pinus contorta) grows in its "shore pine" (P. contorta contorta) form. It's well-named: no lodgepole-straight trunks here, just endless variations of twist and turn, forced into beautiful cantilevers by countless winters of heavy snow. A shore pine with a trunk with the diameter of my arm may have 300 microscopic growth rings in its heart. I love the way the branches reach out; they offer up their clusters of needles with such grace.

I like to think that when we draw from nature, we're drawing nature through ourselves–through eyes and brain and heart, and down the arm onto the page. If that's so, then every time we draw something, we take a little bit of it inside. It has become part of us; we understand it in a new and important way. We've made a connection.

Looked at that way, it doesn't necessarily matter what the end result looks like. The important part is the drawing through.